I've finally started expanding Elsie's world.  First up was the pet store trip.  Yesterday was Home Depot, one of our favorite non-doggy errands.

We actually had an important mission at the store.  Our vinyl picket gate is broken--has been broken since we bought the house.  That was fine until a couple weeks ago, some neighbors' damn cat started coming over to drink from our pond.  Now, I like cats.  I do.  I've got three little kittens I'm fostering right now.

But this guy a) pisses Champ off big time and b) has a questionable skin condition going on--could be fleas/flea allergies since he's wearing an [old] flea collar, could be mange, could just be allergies, but I don't wanna test these theories out.  I've been the neighborhood bitch chasing him off, but he just does not belong here.  I wish his owners would a) take him inside--winter's comin' and all-- b) treat him properly for fleas and get him some damn meds for his skin infection and c) provide him with some fresh water which he's clearly lacking.

Okay, so I didn't mean to rant on about that.  But anyways, the point being, Elsie and I needed to go get some pvc/plastic suitable adhesive to put the gate back together.  We got the glue.  Now I just need to commit to a house project that I've only managed to put off for two years. Woops.

Here are some photos of Else at Home Depot.  She did awesome.  There were two other dogs there, and while I'm not 100% sure she actually saw them since I was proactive about changing routes (no silly treat bag on me yesterday), if she did see them, she didn't react!  Probably a fluke, I know, but I'll take it! 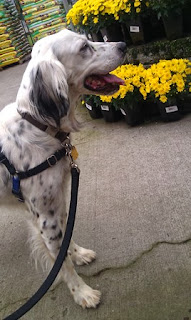 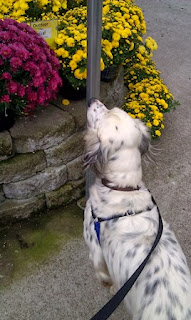 Watching the bees.  Stung at least twice in the last month and still hasn't learned. 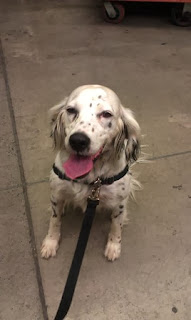 Doing some attention exercises while we waited for assistance inside.


On another note, I took Sophie to the farmers' market this morning.  No pics, but I do have to share what she did.  Now, understand, Sophie is my easiest, least-crazy dog to take out and about.  Kids, people reaching to pet her without asking, no problem.  Walking reasonably on a leash, no problem.  Dogs barking at her, no problem.  Standing at my side while I'm doing something, usually no problem.

Well, right after I bought my eggs at a small rancher's stand, the vendor went to grab the dog bones out of the freezer for me to look at.  I honestly don't know if Sophie heard me talk about dog bones and just got excited or what went through her head.  But as soon as he turned around, she tried to leap right up onto his table-acting-as-counter!  WTH?!  She was in her Hurtta harness and her leash was fairly short (to keep her a bit of a distance from the booth to begin with), so I was able to stop her mid air.  In the process of landing, though, her front paw caught on his booth sign (the flexible/tarp-like fabric sign)--no damage, but I did apologize to him and say that she tried to take it out.  He just laughed.

And he wasn't the only one laughing.  Not me. Two groups who had been walking by behind us saw her in action and actually paused to laugh, in good fun, I'm sure.  But sheesh.  Did she have to go and act like she's a wild child just then?  Way to make an impression, Missy.  Sigh.  My crazies.

Anyways, aside from that, she acted like a proper lady, got lots of compliments, and enjoyed her walk.  Afterwards, we stopped by the pet store, where again, she was a proper lady and decided she was just too good for a treat that the employees offered her....


So that's all for tonight!  Thanks for stopping by!
Champ's Mom and her crazies

Posted by ChampersandsTail at 9:35 PM Visit us at these places, too!

ChampersandsTail
Hi! My name is Champ, although my mom likes to call me Champersands sometimes--I don't know why. I'm a Llewellin Setter, which means I'm a bird dog through and through! However, someone can't seem to cut the apron strings and actually let me go hunting. I'm working on her, though! I love to learn and show off how smart I am. My family thinks I'm pretty cute, but apparently I'm a bit of a brat, too. (I'll probably have some confessing to do later on.) Mostly, I'm just special! (Mom tells me that all the time, so it must be true.) Hope you enjoy your visit!