Oh, hello there!  Just thought I'd drop off this review of the AllSafe Harness!  It's long.  It's unedited.  It's embarrassing.  The video, that is.  The harness is just awesome!

Email ThisBlogThis!Share to TwitterShare to FacebookShare to Pinterest
Labels: Review

Hi Folks,
My update to my TitanTuff Leash Review is overdue, I apologize.  Bar prep began Tuesday after Memorial Day.  This means, of course, that I put in a decent effort last week, and now, thoroughly exhausted, I am taking an wellun-earned break.  Let's see, I'm on episode 25 of 197 of... yes, Grey's Anatomy.  I know. It's not like I haven't already seen most of the series when it was original and also gone through it a second time on Netflix, not to mention countless re-runs on TV.  It's not even one of my favorites!  (Ooookay, maybe it is. Let's add it to my list of guilty pleasures.)

Anyways, I figured today that while I'm sitting on my ass watching Grey's, I'd better do something productive.  Ima gonna update this and then start filming a bunch of other gear reviews from my stash because they might help other silly American Consumerism Victims like me help with their purchase decisions.  Might.

So without further babbling... here's an update from TitanTuff's owner, Josh:

"Hey there Chelsea,
I wanted to touch base with you after reading your review and let you know what changes will be in future models. The cutting while difficult to fix (the blades bend when heated) to solve that issue we are simply going to do what all other leash manufacturers do and simply fold the cut end under creating a 3 ply section and sew ontop of it. Creating a nice and uniform look every time. The alignment we are working on solving by simply changing how we sew, initially we would do the border then the top or bottom. Unfortunately that lets the material move to one side usually. Instead we will be doing the top and bottom to secure it into place then work on the sides. That should cancel out 99% of the issues thankfully. For the row or two of stitching we are simply going to program the machine to do a box stitch inside a box. That gives you the additional line at the top and bottom of each box x stitch. It seems like we'll be pretty much on par once all that happens! Just wanted to let you know your feedback is heard and we definitely can action some of those items.- Josh / Titan Tuff"

I also have some photographs of Sophie modeling it: 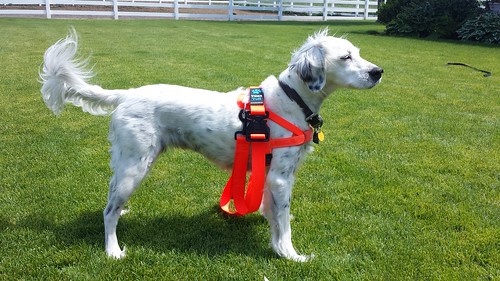 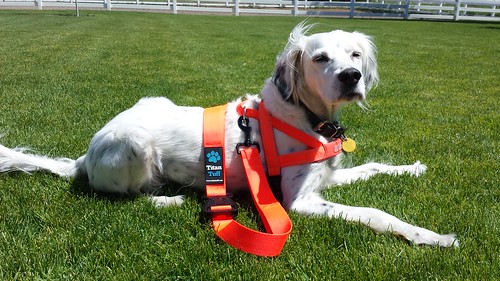 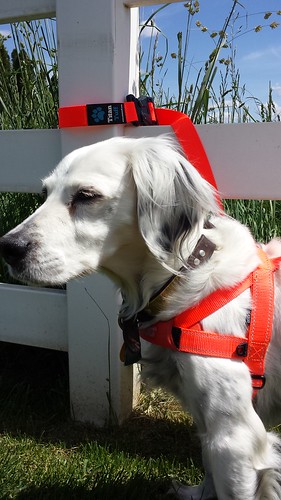 As far as use goes... I kinda really love it.  When I was at my parents', I was using it every day with some counter-conditioning with Champ for his unfortunate dislike of Remi, and in the evenings for CC'ing to the horses while I did chores. I conveniently tethered him to the fence post outside their pens while I had to leave him and feed them,with a ton of treats to scavenge for at his feed, and it worked swell. ;)  Since I've been home here, I've used it on several walks with Sophie.

I think this leash is going to be a big contender on the market once its name gets out there.  Go TitanTuff!  (And go buy a TitanTuff!)

Thanks for stopping by!
Chelsea
Posted by ChampersandsTail at 10:33 AM 1 comment:

Visit us at these places, too!

ChampersandsTail
Hi! My name is Champ, although my mom likes to call me Champersands sometimes--I don't know why. I'm a Llewellin Setter, which means I'm a bird dog through and through! However, someone can't seem to cut the apron strings and actually let me go hunting. I'm working on her, though! I love to learn and show off how smart I am. My family thinks I'm pretty cute, but apparently I'm a bit of a brat, too. (I'll probably have some confessing to do later on.) Mostly, I'm just special! (Mom tells me that all the time, so it must be true.) Hope you enjoy your visit!